July 4th weekend the Utah Backcountry Pilots Association hosted a fly-in at Smiley Creek airstrip in Idaho (U87). I had the lucky chance to break from my normal schedule and get up there and join the fun. I had not yet taken my airplane to a fly-in so this was the maiden fly-in voyage for me and the 120.

I left early-ish on the morning of the July 4th with my trusty sectional, plotter, and E6-B flight computer. This trip was going to be a practice in old technology. I had my cell phone with me but had no intention of using the GPS. It was my AFD, or chart supplement for the new age, and music. All my navigation was to be done using magnetic headings, plotting, and fixing my mistakes when I got lost. I did not even have a VOR to guide my way. 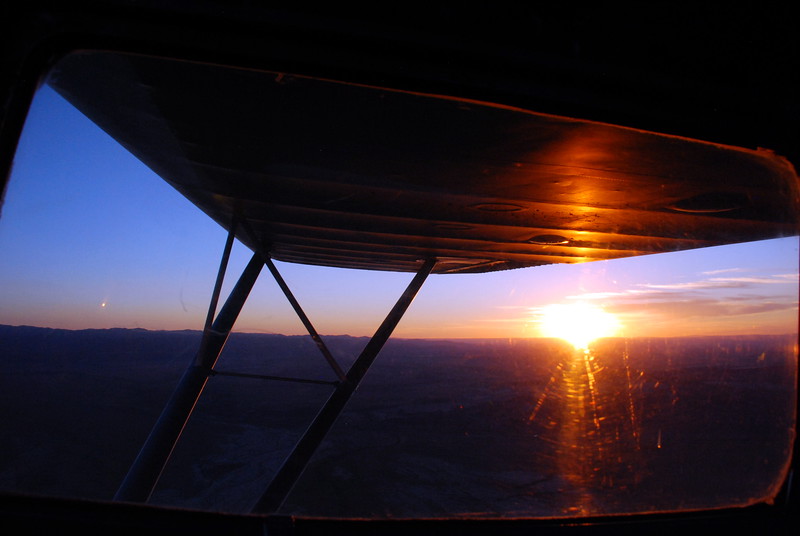 Off I went, headed north through familiar territory. I went through desolation canyon where I frequently fly charters up to Sand Wash for rafters. After flying over Sand Wash airstrip, it was time to start climbing some more. The High Uintas were straight ahead and my course took me right over. The trusty 120 managed just fine especially on a cool morning. I found myself cruising along smooth air looking over frozen lakes and lots of snow on one of the few mountain ranges along the Rockies to run east-west.

After making it across, it was time to start a descent so I could find denser air to breathe and start thinking about my first fuel stop. I tend to plan fuel stops based on price of fuel and potential bathroom necessity. The first stop along the way was Evanston (KEVW). I landed there admiring the high hills surrounding the airport. I then proceeded to wait an hour for the FBO attendant to wake up and turn on the fuel pumps. Their self-serve fuel is not 24 hour and he thought he could sleep in since it was July 4th. After a longer than planned stop, off I was again headed northwest. Next stop was American Falls (U01). I got a little confused north of Logan but after some compass looking, waypoint timing, and pilotage, I was oriented again in a more right-ish direction. This leg wasn't long (121 miles before wrong turns) but it was necessary for fuel price sake and... I needed to pick up some more groceries. The airport was simple. Self serve fuel, old courtesy car, no one around. I think it was primarily a crop-duster strip.

Then next leg had nearly zero waypoints to rely on so it was mostly point and go. I crossed craters of the moon before making a quick top-off in Haley. People complain about Haley saying they don't like small airplanes and the controllers are gruff but my experience was fine. 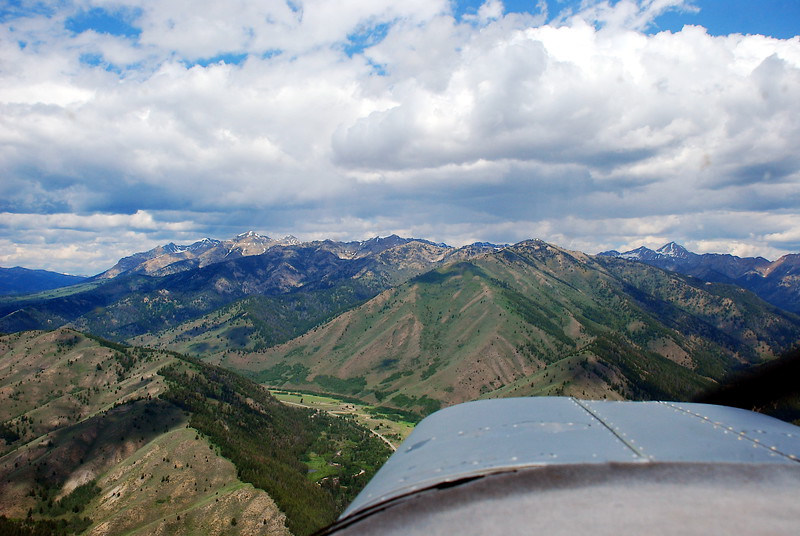 Finally, in the mountains. It was a very short 33 miles direct up to Smiley Creek. I didn't fly direct because that's not how the canyon is oriented but I still made it there in fine time. There were several airplanes coming in as I was arriving and I was just hoping the faster 182 behind me wasn't going to descend on top of me. All worked out and I got the last available spot on the west side of the airstrip (the bathroom side).

It was time to relax. I met lots of people, setup camp, read a book, and took a nap; exactly what I was looking for. Roy, Steve, and some others planned on heading to Sulphur Creek the next morning for breakfast and I planned to tag along. As the sun began to set the air got cold. It was time for bed.

I woke up the next morning to a heavy frost on the airplane. I got coffee started and put on all my layers. I think it got down to 25F that morning. As the sun peaked over the mountains I turned the airplane around so the tops of the wings would face the sun. It thawed out soon enough and I was ready to go. 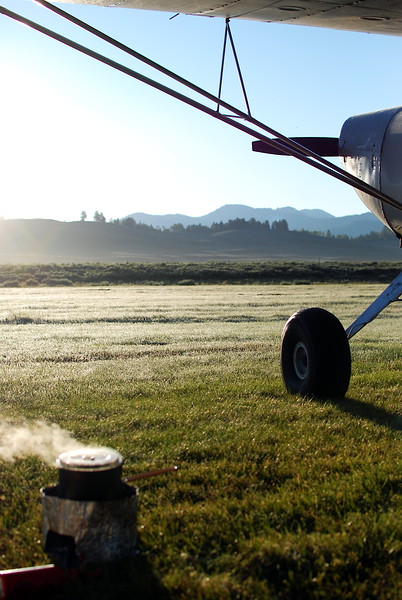 I hand propped the plane and let it warm up. Once a couple guys started taxiing out, I hopped in and was going to take off after. One guy was having mag issues so he stayed behind with another guy. The breakfast club was getting smaller. I took off, navigated up to Sulphur Creek in the beautiful morning air with nothing but a map Steve loaned me (that I still have) and some music. On landing, there was a 182 on approach and a mule train going the opposite direction under him. It was a great sight to see. Sulphur Creek is a privately owned lodge surrounded by wilderness so the only way in and out if you don't have an airplane is by foot or beast. Landing was uneventful, I parked next to Steve's 180, and headed to the lodge to get some breakfast.

Their menu is "yes" or "no". "Yes" costs $25. I ordered a "yes", picked up a breakfast parfait while the goods were cooking and sat down with the Durchies. While we were sitting there Roy and a couple of his kids showed up in the PA-11. Breakfast came soon enough and I stuffed myself on the wonderful vittles. I still had places to go before the heat got me so off I went ahead of the rest of the crew.

Next up was Indian Creek. I was told they have a stellar pooper. Yep, a pooper. It purportedly has a wonderful view overlooking the Middle Fork. A short flight after breakfast I headed up there and parked next to a couple 182s. I was far away from the majestic crapper but there was a really cool looking suspension bridge near where I was parked. I meandered around there for a while, took some photos, and was off again.

Next stop was Bruce Meadows. I didn't have a goal or reason to go to Bruce Meadows but figured I would stop in anyway. It's in a wide open valley with a road nearby. I approached over a piece of the airstrip that seemed to have been reclaimed by the elements and turned into a wetland. Once I thought I was over all the super soft stuff, I put it down and pulled off the airstrip. It was a gorgeous area with some picnic tables. My coworker, Dan, said he goes fishing there but I didn't bring a pole so instead I took out my camp chair and book. While I sat there reading, two tailwheel LSAs and a 210 took off. Eventually the heat started up and I was thinking about lunch so I packed up and headed back to Smiley Creek.

The rest of my day was full of more naps, more reading, some good food, lots of talking with airplane neighbors, ice cream from the store across the road, and an endless game of frisbee that started at 9pm.

More photos can be found at Smugmug-Idaho 2019