I forgot to mention that I had to get fuel July 5th (the night of day 2). I wanted to do more flying and I didn't have fuel access in Smiley Creek so I decided to take an evening flight to Challis (KLLJ). The weather was decent and I left with enough time to get back to Smiley Creek before dark. I climbed pretty high since there's a lot of terrain between Smiley and Challis. Once I was about 15 miles from Challis, I flew into some precipitation. I think it was a sleet mix and I watched it accumulate on my tires just a little. The fascinating sight was looking out across the horizon and seeing all these reflective little dots passing by. They sun reflects off the moisture in such a fascinating way. I've seen the phenomenon before but usually in the winter. After grabbing some fuel in Challis, I headed back to Smiley Creek and beat the dark but not the sun. It was a beautiful time to land with dusk approaching.

The start of day three was a bit warmer than day two. I woke up, made my own breakfast, had the traditional black coffee, then got on my way. 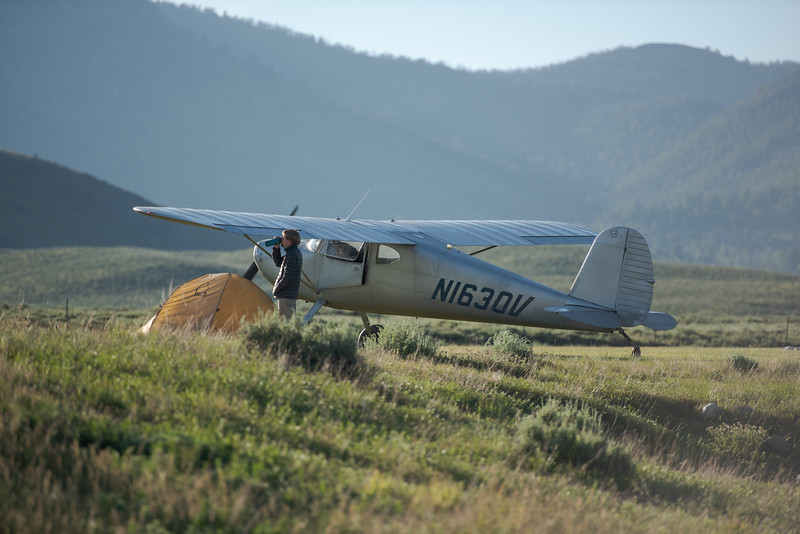 I like to fly early and relax when it is warm outside. I had a list of airstrips to visit but I got started a little later than planned. Instead of going all the places planned, I B-lined it to Thomas Creek. Talking with Steve Durchie the day before, he informed me of a hot spring near this airstrip and drew me one of his famous maps. I didn't really know what to expect at Thomas Creek but the information I got said I could do it. Upon overflying the airstrip I realized I had been there before. I had an interview with a charter operation in Idaho several years ago and this is the first airstrip the owner and I flew to. I made a 180 in the canyon and put it down on the not-so-straight airstrip. There were some tie-downs in the ground so I secured my plane, grabbed my water and camera, and headed down the trail. 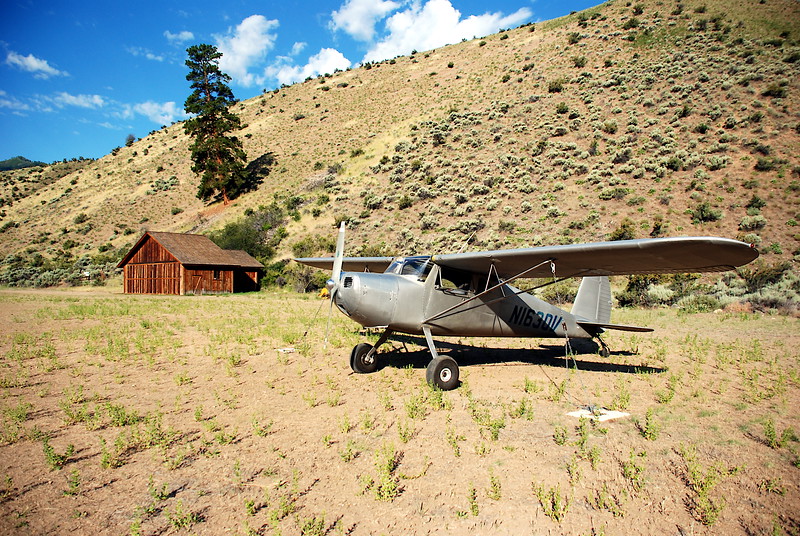 It was an easy walk to the river. This trail leads across a bridge to Middle Fork Lodge before making a hard right at the river bank and turns into a proper foot trail. There was an agreement made between the forest service and Middle Fork Lodge. In order for the lodge to be allowed to build a bridge to service their lodge, they had to allow access across the bridge and along the edge of their property for hikers to make it to the hot spring. I sure liked this agreement. I saw a deer on the road leading to the bridge then came by the lodge's water wheel. It was a cool sight and I really appreciated it since I'm off-grid.

I continued across the bridge then made the mile-ish hike on the foot trail to the hot spring. What a cool sight! I could smell it before I could see it. There was a rafting party camped across the river from the hot spring so I couldn't really get into my full hot-spring attire but I dipped my feet in and read a book. The top pools are WAY too hot to stay in but the bottom pool is perfect. These pools are above the river and have no cooling water added to them. I figured it would be a perfect place to take Kelli in the fall after the first snow falls.

I spent about an hour and a half there reading a book with my feet in the pool, I think; I wasn't really watching my watch. After the air started heating up a bit I started my hike back to the airplane. I met a few people on the hike out. One couple was from Australia. As I learned later on, they are ship captains for a private yacht. They have a pretty great, prestigious job. I saw a large raft taking gear for at least 30 people down river on my hike back. A charter 206 made a stop in as I was getting close the the bridge. The lodge's UTV came zipping by, taking customers up to the airplane. By the time I made it all the way to the airstrip, the Cessna 206 was started and I waved at the pilot as he made his turn to take off.

Upon reaching my plane I decided it was a perfect day to fly without a door. There are only four screws holding on the pilot door so I used my sumping tool/screwdriver to remove the door. I shoved it in the luggage area, grabbed my older headset that doesn't mind oscillating air pressure, and took off down river. After climbing a little I made a turn in the canyon and headed back up river, the way I came in. I flew over another lodge and saw the same 206 that had taken off from Thomas Creek. It was getting hot enough that I wasn't interested in any other landings so I headed back to Smiley Creek for the afternoon. On the way I decided to fly over the sawtooths and take some photos of the high peaks and snow/ice hiding back there. It looks like a mountaineering paradise.

The afternoon was occupied by more naps, reading, and chatting with other pilots. That evening, dinner was provided by the Utah Backcountry Pilots Association. It was pulled pork; I LOVE pulled pork. They had an awards ceremony type thing where I got the award for being the youngest pilot to fly in. There was a younger pilot but he didn't fly in so I won it. Pops Dory won "Shortest Distance Flown to Smiley Creek".

The evening mostly concluded with some strong winds followed by some sprinkling rain. A few of us nerdy-type attendants were rounded up by Roy Evans and were told we should collaborate to make a backcountry weather station. We geeked out for quite a while before I retired to making one s'more and heading to my tent. End of day 3; a good day.

Day four was time to head home. I think I was the first one to leave. I don't remember much of that morning but it was early and I left. Idaho is beautiful but so is my wife so leaving wasn't too hard. I made my first stop at Picabo, ID. I heard there was a gas station right next to the airstrip so I took advantage of my autofuel STC.

The next stop was Heber, UT. Crossing the Crater of the Moon area again got me a bit flustered. There isn't much for landmarks so I kind of guessed and hoped my ground track was right. I landed at a backcountry strip I found along the way just to do it. I was probably 25 degrees off my intended course once I hit my next landmark. I corrected course and used Lake Walcott to fix my position. I crossed some beautiful farmland and a chunk of land owned by Northrop Grumman.

I skirted around the Mode C veil of Salt Lake City since I am sans-transponder. All the area just east of the Wasatch front is absolutely stunning. I landed at Heber to get fuel. I didn't fill up since fuel is expensive there. I headed over to Price, Utah flying over Strawberry Reservoir.

I planned to add enough fuel in Price to make it to Moab since Redtail (my employer) runs the FBO and I get a good fuel discount. I was surprised to find that no one is in Price on a Sunday. I ran around looking for a way to fuel my airplane without using self-serve. I eventually just started the fuel truck, fueled my plane, printed a fuel receipt, and left a note saying to bill me. It was a funny way to get things done.

A short hop across more familiar territory got me home to Moab, UT before things got uncomfortably bumpy. I made it home to the heat, dreaming about the grass and beauty of the mountains I left behind.

Thank you UBCP for hosting a fly-in in Idaho, it was a great getaway in a great location. And thank you, Idaho Aviation Association for preserving so many airstrips that are in remarkable locations. I look forward to next year.